Invertigro: The future of indoor farming 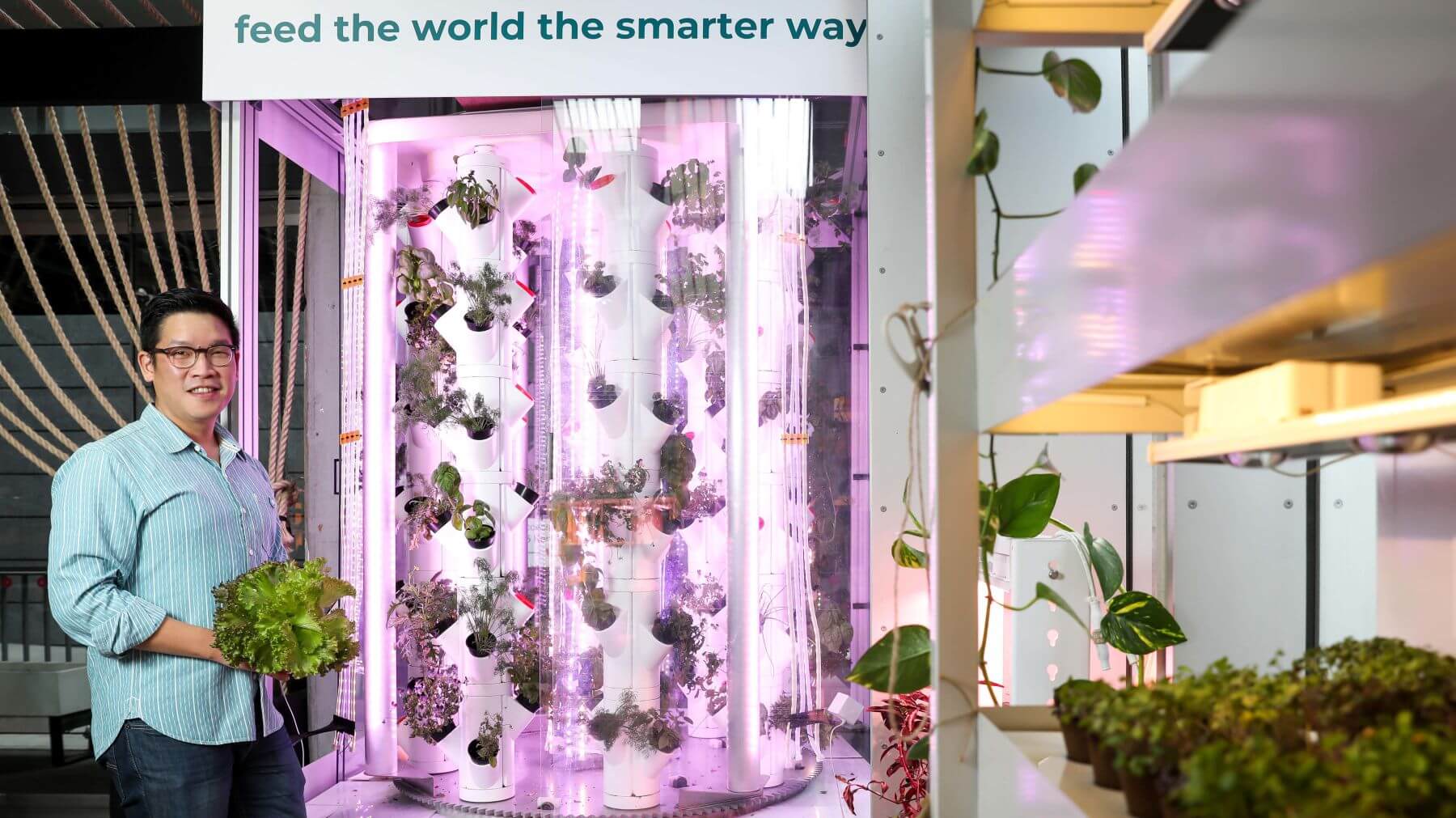 Vertical farming. You’ve probably heard of the term before being spouted by futurists and thought leaders on growing produce for the cities of tomorrow. But as our biggest cities become more densely populated, vertical farming is becoming more important as a way to grow food in the smallest amount of physical space. Homefarms is a startup that is building the technology to increase food production, finding that vertical farming increases total food output without increasing the resources needed to do so.

The Beginnings of Homefarms: From Investment Manager to Modern Farmer

Ben Lee’s first foray into business started right upon finishing high school, setting up a trade business with a friend and dabbling in FMCG (fast moving consumer goods) in lieu of going to university.

“I think I was too young to the appreciate the business process and we sold it as a going-concern,” Ben mused about his inexperience.

After some time trading in the leather industry, buying and selling hides and skins, as well as graduating university with a degree in Neurosciences, Ben found himself in corporate finance as an investment manager. Responsible for investment analysis on esoteric investments for central banks and law firms, it was here after a decade that he experienced the first sparks of entrepreneurship that would later become the beginnings of Homefarms.

One day a couple of indoor farming and agricultural concepts came to the table—one of which particularly jumped out.

“I sat down with a friend and I said, “This is a great idea! Why don't we look at it as more of an investment?’”

“Over time it became more interesting to us in figuring out some of the technology behind it and the numbers. At the time I was getting jaded with the finance world, so I decided that I would leave, and set this concept up as a business.”

It was this idea that precipitated the move to Singapore.

The entrepreneurial process is often slow and arduous with many shifts and turns. Great ideas often need time to incubate. As Ben would find out, despite having a clear vision, the startup journey can take many years of research and careful planning before reaching the next stage.

“The vision of having an indoor farm and being able to produce vegetables came quickly. The idea of developing it, going from owning a farm to developing the underlying tech, that took probably a good two years. In that timeline we were also learning a lot about government regulations, how to deal and get through certain hurdles, especially in new markets.”

Coming into a new space, limited information on Singaporean government regulations were just a few of the difficulties Homefarms faced.

“It was very difficult to get through to the right authorities to propose what we were trying to do and to get any sort of approval because there weren't actually forms or boxes available to be ticked.”

By the time they had acquired approvals after liaising with the ministry, it became apparent that their business model wasn’t quite right. “It was a period of self realisation,” Ben reflects, and recounts that Homefarms pivoted from their owner-operator model to a more suitable systems and services model.

“We have a very engineering heavy background on the team, so we decided to focus our energies on developing the systems and go a bit more into the deep tech space, looking at the underlying technology that can improve the productivity as well as the quality of the produce grown.”

In a similar vein, initially targeting cafes and supermarkets, Homefarms shifted its target market to two different segments—one, F&B (food and beverage) and HoReCa (hotels, restaurant, cafes), focusing on higher value vegetables that we can grow within the systems and environments; and two, larger scale businesses akin to distribution warehouses.

“Where we add value is that we are vertically integrated, so we can be a bolt onto existing operations. If we can grow the produce right next to them, harvest time and the farm-to-table time is cut down dramatically which improves and increases the freshness and quality.”

Product-culture Mismatch? From Europe to Singapore to Australia

Singapore, a small island nation of little natural resources and agriculture, has 98% of its food imported from other countries. While this seemed like the ideal market to introduce the benefits of vertical farming, it soon became apparent that the nation wasn’t quite ready to adopt Homefarms just yet.

“The landscape in Singapore is driven by people who have ideas which the market understands,” explains Ben. “It’s a lot of apps and biotech. When it comes to things that are a little bit more esoteric, it gets a bit challenging.”

In a world where business is becoming increasingly globalised, cultural barriers is a major hurdle when entering foreign markets. It was an unexpected obstacle for Homefarms.

“I spent some time in Malaysia growing up, so I went to Singapore thinking that it would be relatively easy, understanding a bit of the culture and language. But I think coming from a very Western background it was still a huge culture shock. We learnt a lot through that.

“I personally wasn’t so connected within the scene there because what I was doing was so different. There were so few people to talk to and I ended up being very isolated.”

The entrepreneurial landscape in Singapore at the time just wasn’t ready to focus on Agritech as a viable sector.

“There isn’t a big drive. They’re [Asians] generally quite risk averse so adopting new technology is not high on the agenda. If they can identify the value, or if things have already been proved and tested, then they’ll adopt it. To come to the market with a new idea, perhaps the market is just too small to get much traction out of it.”

However, this did not deter Ben at all. After encouragement from the University of Sydney’s Dean of Agriculture, it became apparent that the agricultural research capabilities and the potential of Australia were better than that of Singapore. Given that agriculture has always been a prevalent part of the Australian industry, a lag in the last few years in new technology in this sector almost seemed like a welcome call.

It was for this reason that Homefarms found its new home in Australia and at HHQ.

“I think it was just maybe too early, too early in its stages to be able to have a good enough story to sell at the time,” says Ben. “I’m sad that we couldn’t make it work but it’s actually a lot better to be able to have a stronger research background and then implementing it in  Singapore when the time is right.”

The Importance of Communication: When Yes Means No

Cultural differences exist in every country. The biggest factor to take into consideration when doing business in a foreign country is the method of communication, all the way down to the small nuances. For instance, as Ben encountered, in many Asian societies a simple ‘yes’ doesn’t necessarily mean ‘yes’.

“There’s always going to be cultural differences wherever you go, and culture shock isn’t so much shock as it is realistion. The biggest thing I have learnt is communication.”

Whether it’s negotiation, networking, or even making the first impression with a potential investor, effective communication is a vital skill for any business. Being able to communicate a company vision effectively can be the make or break when it comes to sealing a lucrative deal or missing out on a crucial opportunity.

From London, to Zurich, Geneva, Singapore, and now Sydney, going from a corporate background to entrepreneurship, Ben knows the significance of communication all too well.

“The Asian way of communicating is very different to the western way, but in the Western world, even the Swiss communicate differently to the Germans.

“The communication in Australia is also unique. It’s direct and very clear here and that’s something I appreciate. What’s difficult for me now is going back to the UK where it’s punctuated with so many apologies. So it’s really communication that’s one of the biggest factors of the cultural differences.”

When asked what the biggest challenge was in the startup journey the answer was simple.

“My ego,” he laughs. “Definitely my ego. I went from finance on the buy side, reeling in the power of being able to make or break a deal, to being on the other side of the table and having to face the same type of people that I used to be. It’s never easy, but I think you learn a lot about yourself in the process as well.”

But whether it’s for those who are thinking of starting a business, or those who have lived and breathed corporate, or even those who lack experiences in either fields, the best advice remains the same: talk to as many people as possible.

“The most effective way you get traction is when your message is clear and simple to everyone. As soon as someone understands what you're doing, you have a lot more chance of getting through the next stage.

“It’s also about understanding what people are looking for, being able to say things at the right moment, knowing what sells and how to get it through the next level of discussions. It gives you a good understanding of people who are actually interested, and who are just going to be timewasters.”

It’s an important thing to remember that often gets forgotten: a business vision is not just for pitches, prospective investors, or peers in the sector to understand. It’s for everyone.